Very few expected the 19-year-old midfielder Matteo Guendouzi to start the season in Arsenal’s midfield. With the arrival of the excellent Lucas Torreira and the presence of Aaron Ramsey and Granit Xhaka most probably considered this a “watch and learn” season for the young Frenchman. Yet after three games Guendouzi have played all but 30 minutes of Arsenal’s fixtures. He completed full games against both Manchester City and Chelsea. In this tactical analysis we look more closely at Arsenal’s latest gem.

Matteo Guendouzi is a 19-year-old French midfielder with Moroccan heritage. Guendouzi came through the ranks at Lorient where he made his Ligue 1 debut in 2016/17. In that season, the young central midfielder made four starts and four cameos. Lorient were relegated at the end of the season and Guendouzi therefore spent last season in the French Ligue 2. He only made eighteen appearances in the second division before moving to Arsenal in the summer. His rise to the top has been quick; as stated he spent last season in the French second division and now competes well against world class midfielders in the Premier League. Morocco has tried to convince him to play for their national team, but Guendouzi has apparently decided to try to break into the French team in the future. 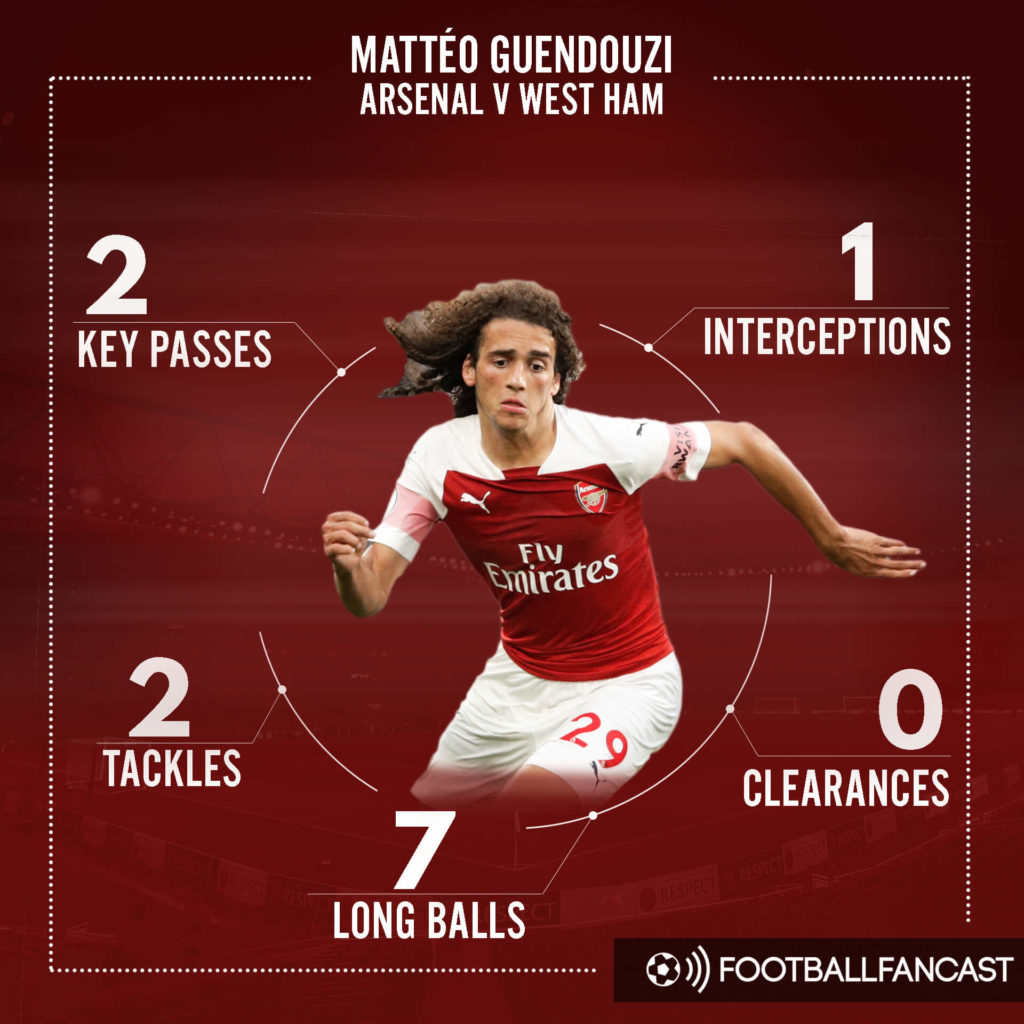 Matteo Guendouzi is a central midfielder. He has started all three of Arsenal’s Premier League games in a midfield duo with Granit Xhaka in Arsenal’s 4-2-3-1. Guendouzi thereby has a vital role in providing a base for the attackers to flourish and to give balance to the team. In the tactical analysis below we’ll look at how he performs in both the attacking and defensive phase.

The main thing that stands out with Guendouzi in possession of the ball is his intelligent passing. He has the ability to combine short in tight areas while also having the range of passing to hit teammates 50 meters away. Unai Emery’s Arsenal really value possession football and they always look to build from the back. Emery’s midfielders are therefore crucial to his side’s attacking play. One area where the young Frenchman can improve, which he likely will with more experience, is to remain longer in central areas before dropping out to receive the ball. The image below highlights a position Guendouzi often picks up. 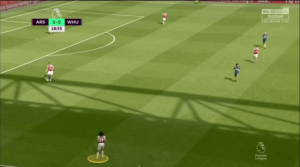 Since this happens repeatedly, I expect it to be an instruction from Emery, but what I’m trying to highlight is that Guendouzi always demand the ball in these areas but rarely does as emphatically when he’s positioned more centrally. The reason is simple; there’s less pressure out wide and he will have plenty of time to steady himself on the ball. Given his inexperience I’d expect Guendouzi to remain longer in central areas and demand the ball just as much there from where he can really hurt the opposition.

One example of Guendouzi’s passing ability was this stunning through pass to pick out the run of Hector Bellerin away at Chelsea. The pass is perfectly weighted and Guendouzi picked the perfect time to release the ball which meant Bellerin didn’t go offside. The vision, timing and technique needed for these types of passes tells you a lot about the teenager’s quality. 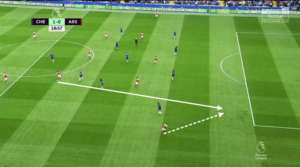 Another thing I really like with Guendouzi is his willingness to quickly progress the ball forward if possible. Many young players opts for the easy option and recycles possession but Guendouzi looks to hurt the opposition when he picks the ball up. The two situations against Chelsea below are good examples of this. 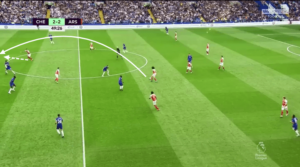 Above, Guendouzi picks the ball up in midfield and immediately spots the run of Pierre-Emerick Aubameyang behind Chelsea’s high defensive line. He looks to find the run with a pass straightaway. David Luiz intercepted the pass, but simply the fact he looked for the pass is encouraging for Arsenal. After all, the Gabonese striker is one of the quickest players in Europe and Arsenal need to utilise his speed when possible. Below is another example of Guendouzi spotting the run of Aubameyang early. 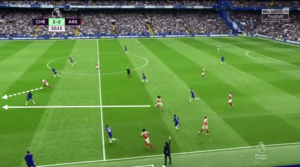 Guendouzi is also a very good dribbler which he showed against Chelsea when he skipped past N’Golo Kante on a few occasions. His speed and technique makes him very good in these situations which makes it interesting to possibly seeing him in a more attacking role in perhaps a 4-3-3 with Torreira as the holding midfielder.

Despite his merits in possession so far it’s Guendouzi’s defensive ability that stands out so far. According to whoscored.com, Guendouzi averages 3.3 tackles per game and also 3.3 interceptions. This highlights an aggressive presser and a great reader of the game. His mix of physical defending qualities with his energy and quick feet as well as his intelligence out of possession makes Guendouzi an exciting midfield prospect. The below image is one example of the youngster reading the game well. Manchester City left-back Benjamin Mendy looks to play a pass through Arsenal’s midfield. But Guendouzi quickly reads the play and intercepts the pass. 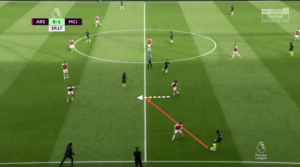 There are some weaknesses in his game too, however. The glaring example is the first goal Arsenal conceded against Manchester City. Raheem Sterling dribbled inside where Bellerin’s defending was weak and the Spaniard passed Sterling onto Guendouzi. Guendouzi came into the situation wrong and basically showed Sterling the way to go past him too. Sterling duly did before firing home the opener. 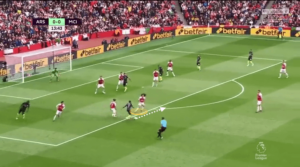 As you can see by his body positioning, the initial defending from the Frenchman is nowhere near good enough. His feet are flat, which sees him unable to move as quickly as Sterling. He also gives Sterling way to much space to run into before shooting. Bellerin is still the main culprit in this goal, but Guendouzi could have done a lot better.

19-year-old midfielder Matteo Guendouzi has impressed so far for Arsenal. He’s started all three games in central midfield and has largely impressed. There are minor details in his game that need to be improved, but it seems likely this will come with experience and more confidence. It would be intriguing to see him together with Torreira for longer than the spells they’ve had together thus far. The Uruguayan gives Guendouzi more license to go forward and I can’t help but feel a 4-3-3 with Torreira at the base behind Guendouzi and one of Xhaka and Ramsey would be intriguing. Either way, Arsenal have found a possible midfield presence for years in Matteo Guendouzi.

What Will Gabriel Jesus Bring to Arsenal?

Reiss Nelson: Through the eyes of a Hoffenheim fan

Arsenal’s Midfield Options For Liverpool Away?

A Celebration Of Safety And A Final Farewell