The matchup between Sheffield United and Arsenal saw Arsenal carry their lackluster away form to Bramall Lane. Sheffield United came away with the 1-0 home win on the excellently executed set-piece goal by Lys Mousset. Arsenal’s poor result brought them to only 1 win in 5 matches away from home.

This tactical analysis will breakdown three key aspects impacting the match. The first aspect is Chris Wilder sent out Sheffield United with a clear attacking tactic to unbalance Arsenal. Next, a breakdown of Wilder’s intentional plan to exploit Unai Emery’s defensive corner setup. Finally, Arsenal had non-dominating domination of possession. 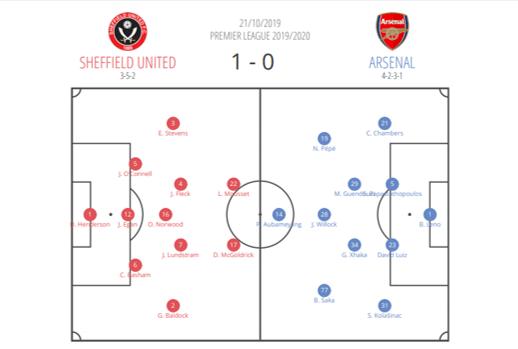 Arsenal countered with a 4-2-3-1 setup. Bernd Leno in goal with a back four of Calum Chambers, Sokratis, David Luiz, and Sead Kolašinac.  Granit Xhaka and Mattéo Guendouzi sat in front of the back four.  Joseph Willock was in the middle attacking role flanked by Bukayo Saka and Nicolas Pépé. Pierre-Emerick Aubameyang was the striker.

Sheffield United Target the Left Side

To read the full tactical analysis of this match – click here

If you love tactical analysis, then you’ll love the digital magazines from totalfootballanalysis.com – a guaranteed 100+ pages of pure tactical analysis covering topics from the Premier League, Serie A, La Liga, Bundesliga and many, many more. Buy your copy of the October issue for just ₤4.99 here

Unai Emery’s conundrum: What should be the priority for the rest...

Tierny admits the hardest decision he had to make in his...

Arsenal well placed to return to the Champions League if shock...