The top match of the weekend featured the North London derby with Tottenham Hotspur visiting Arsenal. The rivalry match did not disappoint- the game was an end-to-end battle with Arsenal coming back from a 2-0 deficit to salvage a point 2-2. The match also saw a fantastic yet slightly unexpected tactical battle.

This tactical analysis will provide an in-depth analysis of the tactical strategy employed in the 2-2 derby draw. Tottenham’s manager Mauricio Pochettino sent his squad out to be disciplined defensively and attack through the counter. Unai Emery chose the opposite tactic and tasked his Arsenal squad with getting numbers forward into the attack and press the ball high up the field.

Arsenal employed a 4-3-3 alignment. Bernd Leno was in goal behind a back four of Sead Kolašinac, David Luiz, Sokratis, and Ainsley Maitland-Niles. The midfield was anchored by Granit Xhaka, with Mattéo Guendouzi on his left and Lucas Torreira on his right. The front line was the trio of Pierre-Emerick Aubameyang, Alexandre Lacazette, and Nicolas Pépé.

Tottenham Hotspur countered with a disciplined 4-4-2 setup. Hugo Lloris in goal with a back four of Danny Rose, Toby Alderweireld, Jan Vertonghen, and makeshift right-back Davinson Sánchez. Harry Winks and Moussa Sissoko sat in front of the backline with Érik Lamela on the right and Christian Eriksen on the left. Harry Kane and Heung-Min Son were up top. 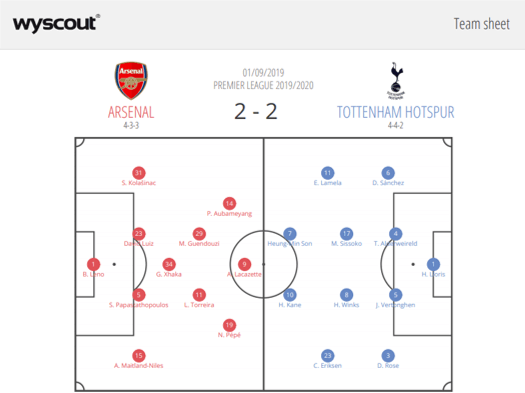 To read the full tactical analysis of this game – click here

If you love tactical analysis, then you’ll love the digital magazines from totalfootballanalysis.com – a guaranteed 100+ pages of pure tactical analysis covering topics from the Premier League, Serie A, La Liga, Bundesliga and many, many more. Buy your copy of the August issue for just ₤4.99 here.

Sagna has a lot of praise for Asenal signing Saliba

‘Start of the new era’ – Arteta has induced a champion’s...