This tactical analysis will provide an in-depth analysis of the tactical cause of Arsenal getting caught in end-to-end matches. Arsenal is giving up four more shots than they take per match. This analysis will focus on Unai Emery’s intentional tactic of pushing both full-backs into the attacking third and using their midfielders to cover these wide spaces. 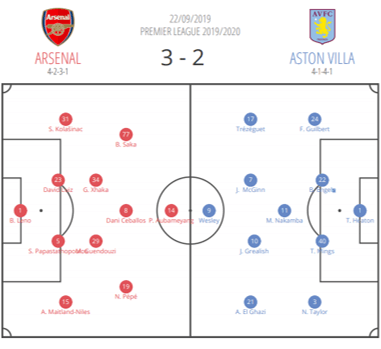 Aston Villa lined up for the match in a 4-1-4-1 formation. Tom Heaton in goal with a back four of Frédéric Guilbert, Björn Engels, Tyrone Mings, and Neil Taylor. Marvelous Nakamba sat in front of the back four with John McGinn and Jack Grealish in central midfield. Mahmoud Trezeguet and Anwar El Ghazi were the wide attackers and Wesley the target forward.

Arsenal countered with a 4-2-3-1 alignment. Bernd Leno was in goal and the back four consisted of Sead Kolašinac, David Luiz, Sokratis, and Ainsley Maitland-Niles. Granit Xhaka and Mattéo Guendouzi anchored the midfield with Dani Ceballos playing a more attacking role. The front-line trio was Nicolas Pépé, Pierre-Emerick Aubameyang, and Bukayo Saka.

If you want to read the full tactical breakdown of this game, head over to totalfootballanalysis.com or click HERE

If you love tactical analysis, then you’ll love the digital magazines from totalfootballanalysis.com – a guaranteed 100+ pages of pure tactical analysis covering topics from the Premier League, Serie A, La Liga, Bundesliga and many, many more. Buy your copy of the August issue for just ₤4.99 here

Emery’s Decisions to Decide if Arsenal Get All Three Points vs...

‘No to Lemar and Kluivert’ – Arsenal should avoid signing wingers

Arsenal Add Boring to Ineffective In Draw With Manchester United –...

What Trophy is Arsenal Most Likely Winning This Season?

Gabriel Jesus’ Signature was a Jackpot for Arsenal